The highest altitude attained by a person has seen one discontinuity of more than ten years of progress at previous rates since 1800, and one non-robust discontinuity of five years, shown below.

See also the historic trends in altitude page. The main difference for this page is that the altitude has to be reached by a person instead of by a man-made object.

We looked for records in height from the ground reached by any person.

We collected data from various sources, and added them to this spreadsheet, tab ‘Summary’. This data is shown in Figures 1-3 below. We have not thoroughly verified this data.

Later records come from manned spaceflights. These are extremely well documented, and there are only a small number of them, so it is unlikely that we missed any. Earlier records were reached by mountain climbers, balloons, and various kinds of aircraft. Collecting such data is more difficult, and so is less likely to be complete.

We also intentionally left the data less complete than usual in places where completeness seemed costly and unlikely to affect conclusions about discontinuities. The following section discusses our collection of data for different periods in history and details of our reasoning about it.

Here we describe the history of progress in altitude reached and the nature of the data we collected during different times. See the spreadsheet for all uncited sources.

The highest altitudes probably attained before 1800 were by mountaineers. The European tradition of mountaineering is the best documented, however, all of their early records were overturned a few decades ago. In 1999, three mummies were found on the summit of Llullaillaco, at an elevation of 6739m. These three children were sacrificed in an Incan religious ritual at around the year 1500. It is possible that Incan climbers reached higher elevations as well: the highest elevation in South America is 6961m, and does not require a technical climb. We take 6739m as our initial altitude record for the years prior to 1800.

The first time a person exceeded this record was the hot air balloon flight of 1803, which reached an altitude of 7280m. This appeared as a large discontinuity in the historic trends in altitude page. Due to the uncertainty of estimating a trendline from the unrecorded Incan mountaineering tradition, we will not look at this record here.

We collected all entries from Wikipedia’s flight altitude record page, which claims to cover ‘highest aeronautical flights conducted in the atmosphere, set since the age of ballooning’. It is not entirely clear to us what ‘aeronautical flights’ covers, but seemingly at least hot air balloons and planes. This list is likely to be more complete for manned flights than for all man-made objects. Manned flights are more interesting to more people, so they are more likely to be recorded, and they are typically more difficult, so fewer actors are capable of doing them.

The manned altitude record was held by balloons for most of the time prior to World War II, except for 1923-1927, when the record was held by propeller aircraft. While the record for propeller aircraft does not appear as a discontinuity, it does herald the start of a period of more rapid improvements in both aircraft and balloon altitude records from 11km in 1923 to 22km in 1935.

On April 12, 1961, Yuri Gagarin became the first person to cross the K&aacuterm&aacuten line and enter space, reaching an altitude of 327km on Vostok 1. This represented a discontinuity of 23 years, based on the exponential trend from rocket aircraft.

The two most recent rocket aircraft records before Vostok 1 were made by the North American X-15. The X-15 showed more rapid progress than previous rocket planes and reached an altitude of 107km by 1963. If someone in early 1961 had updated strongly on the recent progress of the X-15, then they would have expected a faster growth rate, and Yuri Gagarin would only look like a 5 year discontinuity. Since the X-15 had only set two altitude records before Vostok 1, and one of them was only two weeks before the discontinuity, we think that it is more reasonable to use the broader rocket plane trend.

Later Apollo missions also orbited the moon. The altitudes of their orbits above the moon was within 10km of the altitude of the orbit of Apollo 8 above the moon. This is smaller than the variation in the distance between the Earth and the Moon (50 km). All of these records are extremely similar to each other. Apollo 13 did not drop into orbit around the moon, and so reached the farthest distance any person has been from the Earth: 400,171km.

Figure 1 shows all of the manned altitude data we collected, including entries that turned out not to be records. Figures 2 and 3 show the best current altitude record over time. 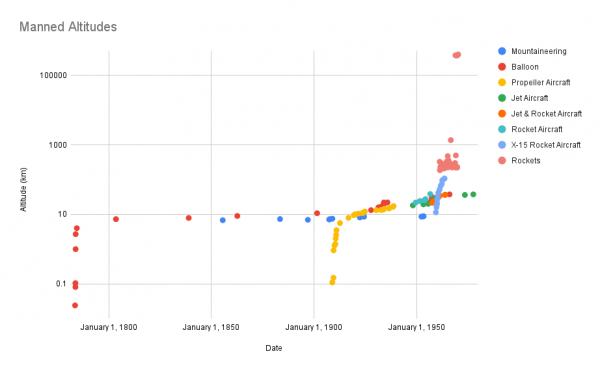 Figure 1: Altitudes of various people, including many non-records. Whether we collected data for non-records is inconsistent, so this is not a complete picture of progress within object types. It should however contain most aircraft and balloon records since 1783, and all manned rocket flights between 1961-1970. 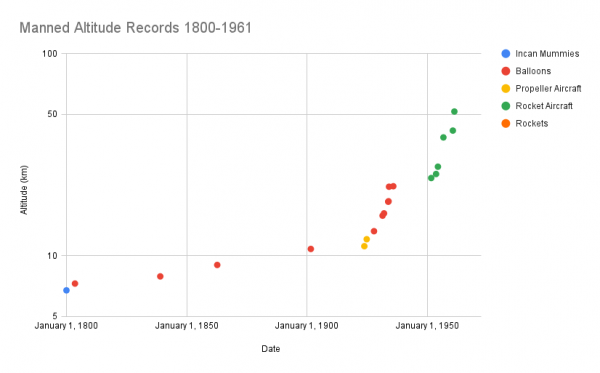 Figure 2: Record manned altitudes known to us from 1800-1961. This plot summarizes the history prior to human spaceflight. 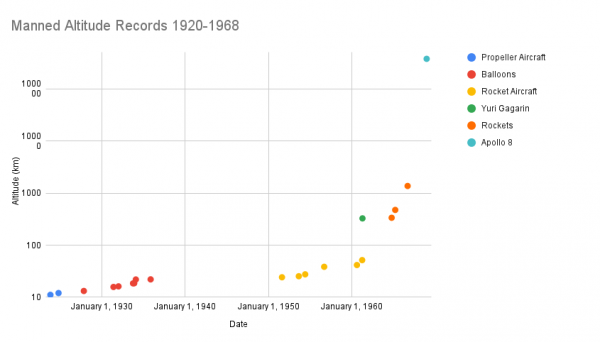 For measuring discontinuities, we treat the past trend at a given point as exponential and as starting from earlier or later dates depending on what fits well at that time. Relative to previous rates, this altitude trend contains one robust discontinuity of greater than ten years, and one non-robust discontinuity.

In addition to the size of these discontinuities in years, we have tabulated a number of other potentially relevant metrics here.

Thanks to Jason Parisi for suggesting a potential discontinuity in manned altitude records.