This is a list of animals with small brains and their performance on relatively advanced cognitive tasks.

Many of the following studies make use of Y-mazes (or variants thereof) to test insect capabilities5),6),7),8),9),10). Y-mazes consist of two chambers—in the first room the insect sees a single stimulus (e.g., a yellow shape). The insect is then released into the second chamber where there are two choices. For instance, if a researcher were trying to test whether a bee had the concept of “sameness,” she might put a yellow shape in the first chamber, and a yellow and blue shape in the second chamber (pictured below11)). If the bee flew to the yellow shape it would receive a reward (and a punishment if it flew to the blue shape). 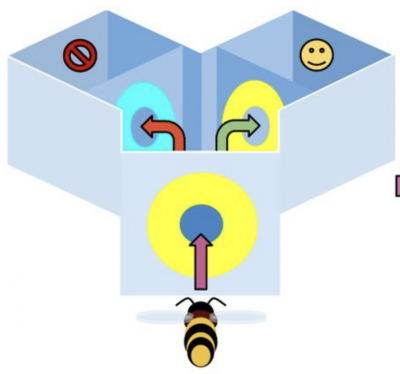 In order to test whether the bees can generalize the concepts (rather than merely finding associations), researchers will often test the insects on stimuli that weren’t present during training (these are called ‘transfer tests’). For instance, if the bee was trained on blue and yellow shapes, the experimenter might test it on green shapes. These studies also typically tried to control for possible confounds (e.g., researchers made sure to change shapes, colors, and sizes to avoid possible associations the bees might be making between the initial and final stimuli).

Honey bees have been observed to extrapolate category membership after only a few instances of seeing that category. For example, in Zhang et al.12) and as reviewed here13), honeybees were first trained to, upon first seeing an image in one chamber of a Y-maze, fly to the identical image in the next chamber for a reward. They learned how to do this successfully for star shaped flowers, circular flowers, stems, and landscapes after 20 training rounds for each category on average.

Then, the bees were tested on whether or not they would fly to a novel image from the same category they had seen in the first chamber. In the figure below, the sample section displays what image the honeybees were shown (these are the images it was trained on), and the choice frequency demonstrates which image they flew to for an expected reward (these are images they hadn’t seen before). This was meant to measure how well bees could generalize to novel members of a learned category. 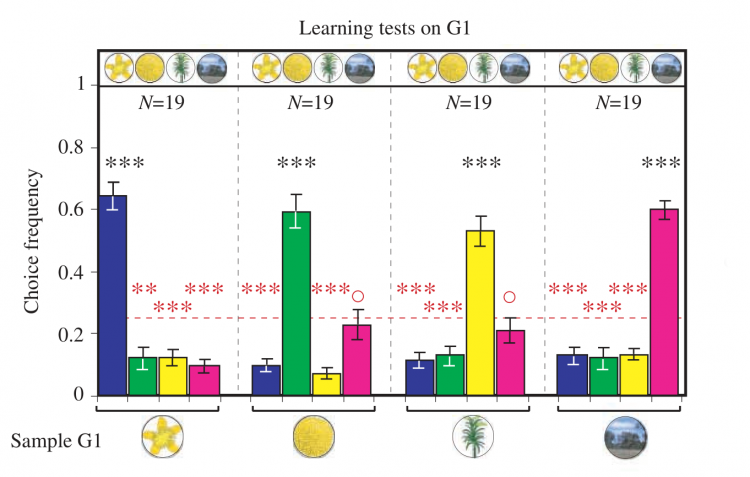 In general the bees had an accuracy of 60% for choosing the image the researchers considered to be in the same category, which is much better than chance (chance is 25% here—this particular maze had four options). This demonstrates that honey bees have substantial ability to recognize extensions to human categories.

Howard et al.14) claim that honey bees can perform addition and subtraction. In their experiment, bees are first presented with an image containing one to five shapes. If the shapes were colored yellow, the bee was then trained to fly to the image containing one fewer shape in a Y-maze (this represents the concept subtraction). If the shapes were blue, the bees were trained to increment instead. The following is an image of this training set up: 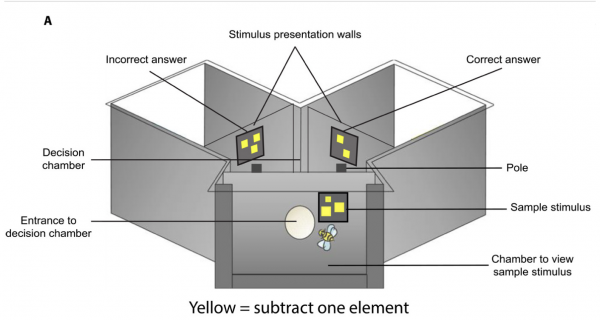 Once honey bees were trained (after 100 trials), they were tested on an image containing three shapes (this number was never used during training). Test accuracy was around 65% for both addition and subtraction (in this experiment, chance level was 50%).

Using a similar experimental design, Howard et al.15) tested whether honey bees appeared to understand the concept zero. To test this, they presented bees with a single yellow shape. Bees then had a choice to fly to either an empty image or an image with between 1 to 5 yellow blocks. They preferentially flew to the empty image (64% of the time), indicating to the authors that the bees understood the concept zero, although other interpretations are possible16).

In a seminal study, Chittka & Geiger17) demonstrated that bees seem capable of counting18), in the sense that they seem able to rely on discrete landmarks. They assessed this by first setting up four bright, large, yellow tents. They then trained bees to fly from their hive to a feeder placed in the middle of the third and fourth tent. Importantly, they made sure that the tents were spaced far enough apart so that the bees would not be able to see more than one at a time.

Once bees had reliably learned where the feeder was, they rearranged the tents by increasing the spacing between them, but they did not change the placement of the feeder. Thus, a feeder placed between the second and third tent was the same distance away from the hive as during training, but the bees would pass one fewer landmark to get there.

They also placed a feeder between the third and fourth tent (which was now much further from the hive than the initial feeder had been during training) and observed which feeder the bees preferred. Around 80% of the bees chose the closer feeder, indicating to the authors that they were not using the landmark cues (i.e., not counting) and around 20% chose the further one, indicating the opposite.

They ran a control to make sure that bees did not simply prefer the closer feeder, all else equal. When they placed a feeder between tents two and three and one between three and four without changing the tent spacing (i.e., the training condition), bees dramatically preferred the further feeder. The test condition was significantly different from this control condition, indicating that (although the majority of the bees did not appear to rely on counting), some of them seemed to use counting to estimate distance to the feeder.

Giufra et al.19) test whether bees appear to understand the concept of sameness using a Y maze. First, they train the honeybees (over 60 runs) to associate some stimulus in the first chamber (such as a blue colored shape) with the same stimulus in the second chamber.

Once the bees have learned this, they test them on novel stimuli. For instance, if bees were trained using colored stimuli, they might then present bees with a horizontally grated stimulus in the first chamber. If the bees then chose the horizontal stimulus in the second chamber over a vertically grated stimulus, this was taken as evidence that bees understand the concept “same.”

They used this paradigm with many different train/test pairings. For instance, in another experiment they train the bees on gratings, but test them on colors. In another they trained bees on odors and tested them on colors. Across all of these experiments, bees showed 70-80% accuracy at test (chance is 50%).

Using a Y maze, Avarguès-Weber et al.20) test whether honey bees appear to have the relational concept of above versus below. To do so, they first present the bees with a single, horizontal line in the first chamber (hereafter referred to as the “reference line.”) The position of this line is held constant throughout the experiment. In this portion of the Y-maze, only a line is present. Shapes are introduced in the second chamber (as will be discussed shortly). 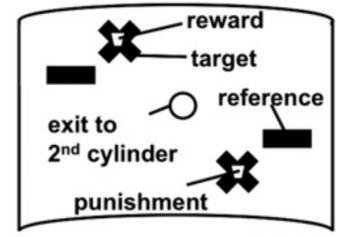 Once the bees have learned this (around 30 trials), they are tested on the above or below concept using a novel shape (at varying distances from the reference line). Bees achieve an accuracy of around 75% at this task (chance is 50%).

This group performed a second experiment using the same experimental design except that they varied the position of the reference line during training and test. Again, bees performed moderately well, achieving 70% accuracy.

Perry & Barron22) observe weak evidence of bees preferentially avoiding difficult discrimination tasks, when given the choice. In other words, bees seem capable of assessing their own uncertainty about whether or not they’ll be able to perform a task—a form of meta-cognition.

They use an experimental paradigm almost identical to the one used in the above versus below experiment (previous section). There are, however, two main differences. 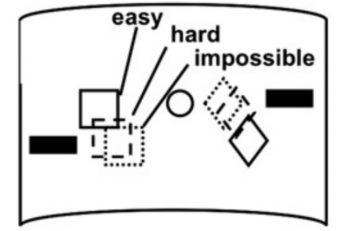 Secondly, bees in this experiment are given an option to “opt out.” That is, upon entering the second chamber and viewing the stimuli, the bees can choose to fly to a third chamber where they will be faced with another decision (containing a randomly selected stimuli pair of any difficulty level). However, their decision in the third chamber is forced (they have no option to opt out again once they’ve entered).

To address this potential confound, Perry and Barron look at the difference in performance of trials in the unforced decision chamber and the forced one (once bees have chosen to opt-out). If bees were assessing each difficulty separately, one would expect them to do better in the former relative to the latter. This is what the authors find—the bees were accurate around 60% of the time in unforced hard trials, but only 50% for forced hard trials. In other words, bees appeared capable of choosing not to opt out on the easier subset of hard trials23).

In a recent study, Alem et al.24) trained honeybees to associate a plastic blue disc with a reward (sucrose). They then put the blue disc under plexiglass and attached a string to it such that honeybees could retrieve it by pulling said string. One hundred and ten bees were then given two five minute blocks to explore this environment. Of these, two bees managed to spontaneously figure out how to use the string to reach the reward, making this a rare capability (top 2% of bees).